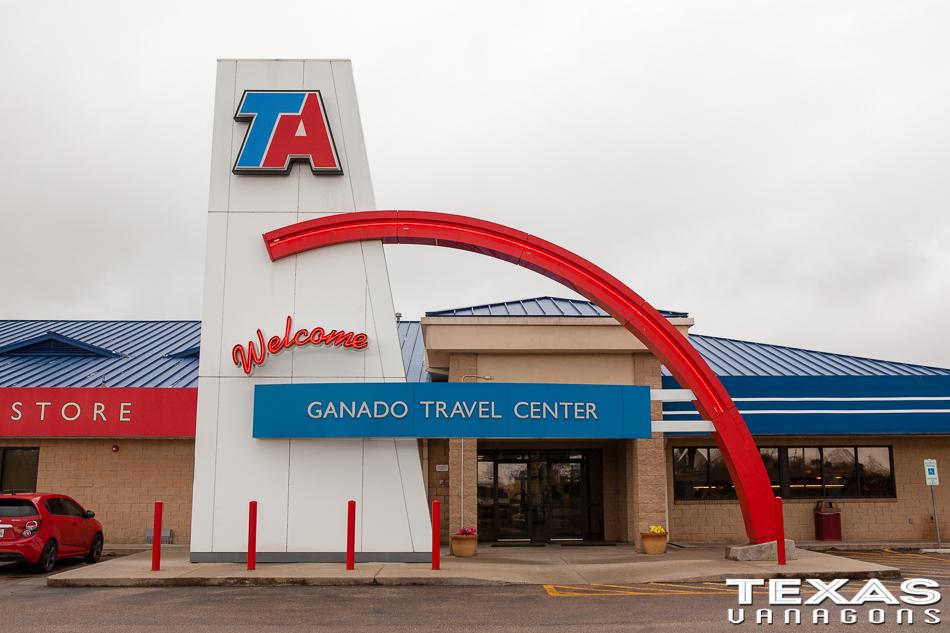 When I first tell my friends I shower at Truck Stops while out on the road I get a weird, disgusted look from them as if it’s the dirtiest thing ever. Lol. Well I’m here to help clear the air on a very good option for staying clean while on the road.

Often times I’m not staying at a Campground or State Park that has showers so when I’m in need of one I simply look for the nearest Truck Stop. The ones I’ve been using have been TravelCenters of America, or TA Truck Stops for short.

Showers cost $13.00 and you can simply ask the cashier working the register that you’d “Like to purchase a shower.” They’ll ring you up and hand you a Shower Receipt. It’ll display what Shower Room Number is assigned to you as well as a PIN Number to enter in order to get access to your room. 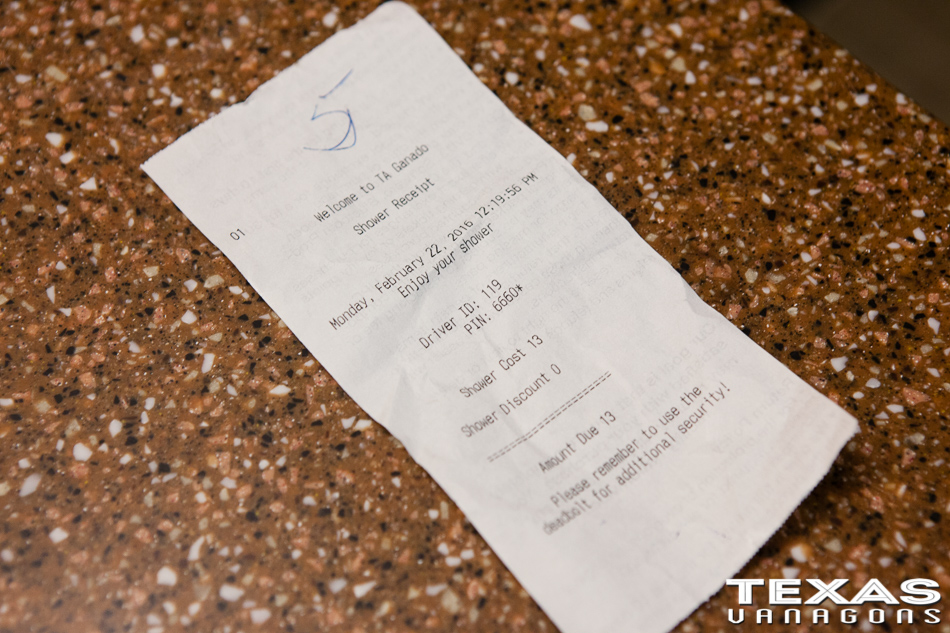 It’s also worth noting that there may also be a Shower Kiosk where you can purchase your shower without having to ask the cashier. I prefer asking the cashier because I can also ask how many people are in line for a shower. I’ve learned that stopping in for a shower in the evening is the WORST. I tried the evenings twice and the lines had anywhere from 15 to 27 people waiting. Not good. The best times I’ve found are mid morning…8-11am or so. There’s always an open Shower Room, no waiting!

Once you’ve received your Shower Room receipt, you’ll walk back to the Shower Room area of the store. You’ll notice a bunch of numbered Shower Rooms. Simply find the one marked on your receipt, Shower Room 5 in my case. 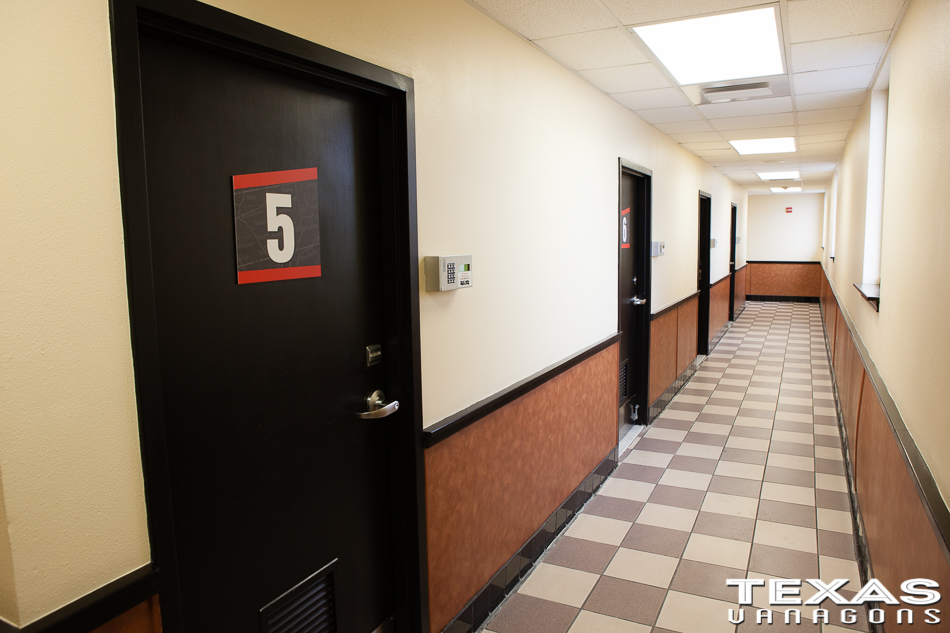 Enter in the PIN Number found on the receipt and the door will unlock and you’ll be let in. 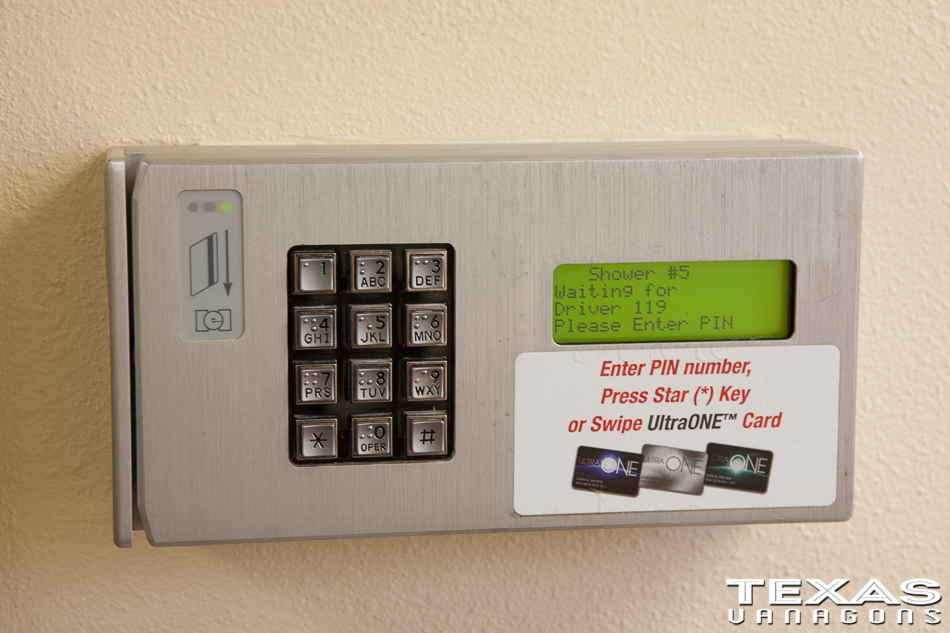 Each Shower Room is like its own hotel bathroom. Complete with sink, mirror, toilet and of course your standup shower. Nothing like the creepy community showers I’m sure my friends envisioned when they heard the words “Truck Stop Shower” come out of my mouth. Ha! 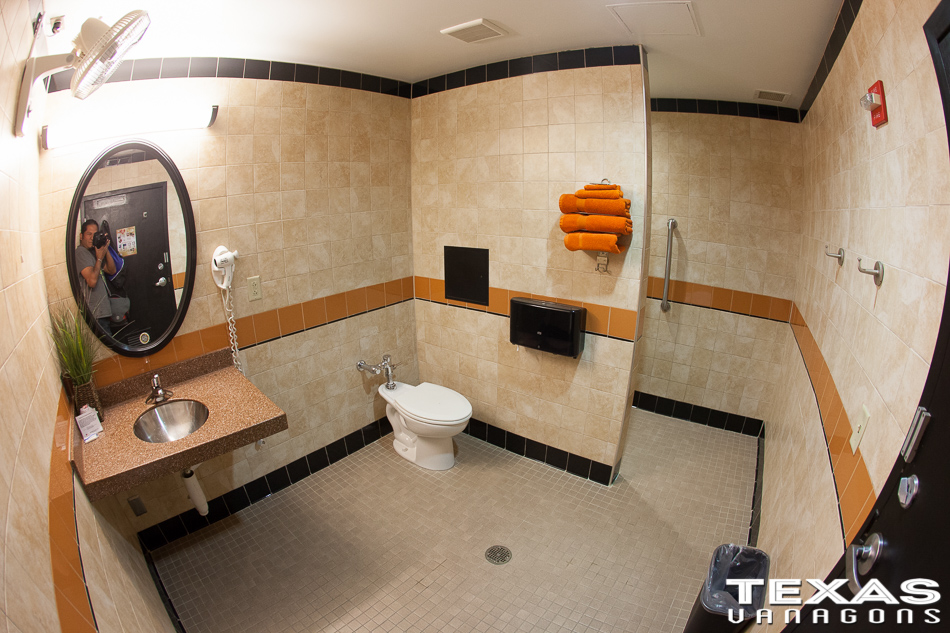 The Shower Rooms are definitely nicer than the bath houses I’ve seen at many state parks and I’d even say they’re nicer than many of the $100-$150 a night hotel rooms I’ve stayed at. 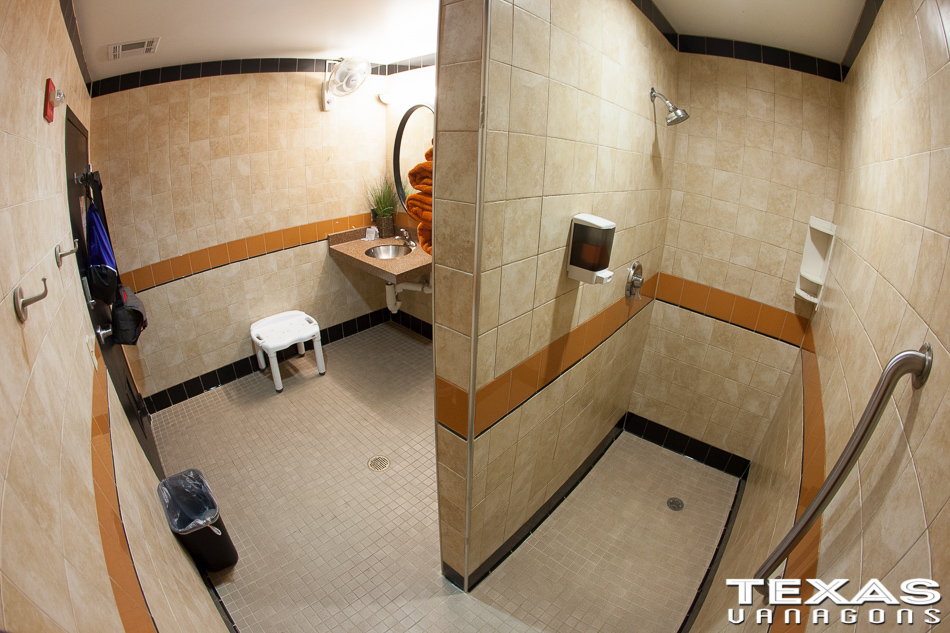 The vanity area is nice so you can brush your teeth, shave and blow dry your hair. You can even plug your phone charger up and get a good charge while you freshen up. 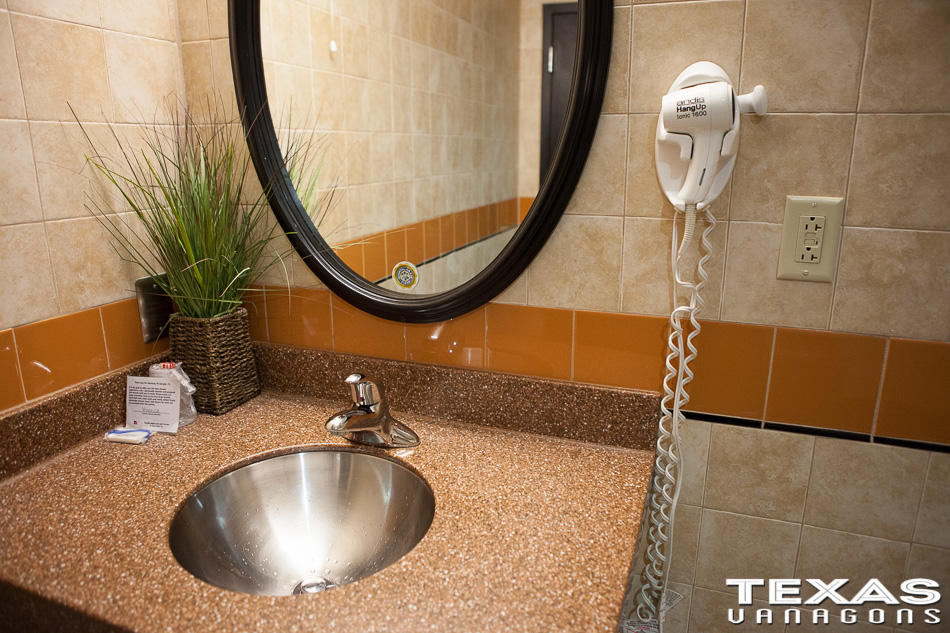 Much like hotels, these TA Truck Stops have attendants that are in charge of disinfecting and cleaning each Shower Room after use and get it ready for the next person in line. I’ve never been in a Shower Room that was less than spotless so you germaphobes out there needn’t worry. 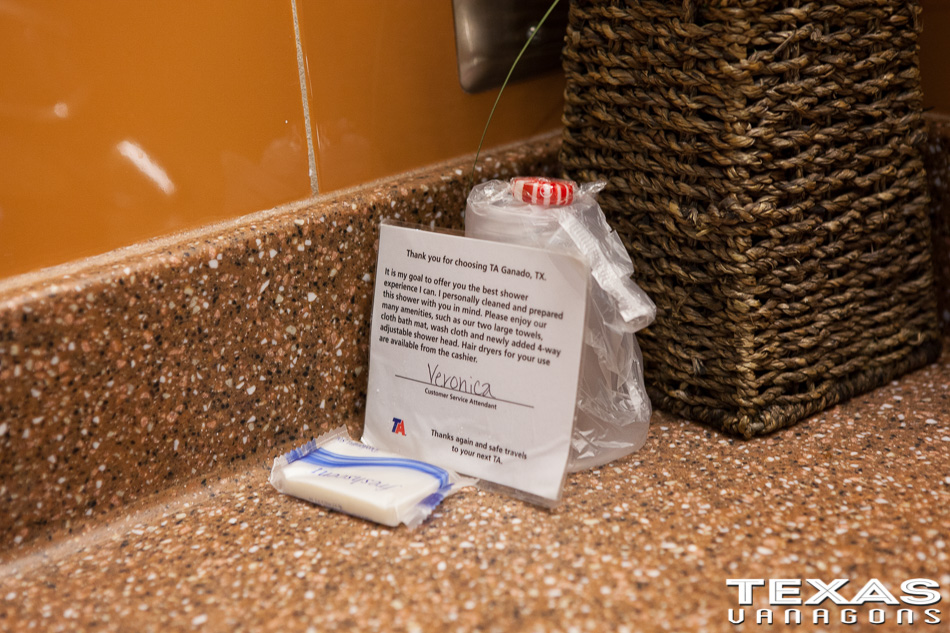 The one thing I do recommend… in ANY public shower is to wear a pair of Flip Flops at all times. No matter if you’re showering in a truck stop, state park or hotel. Wear Flip Flops! I had a friend get a Staph Infection on his foot from a public shower and he nearly had to have it amputated. No lie. 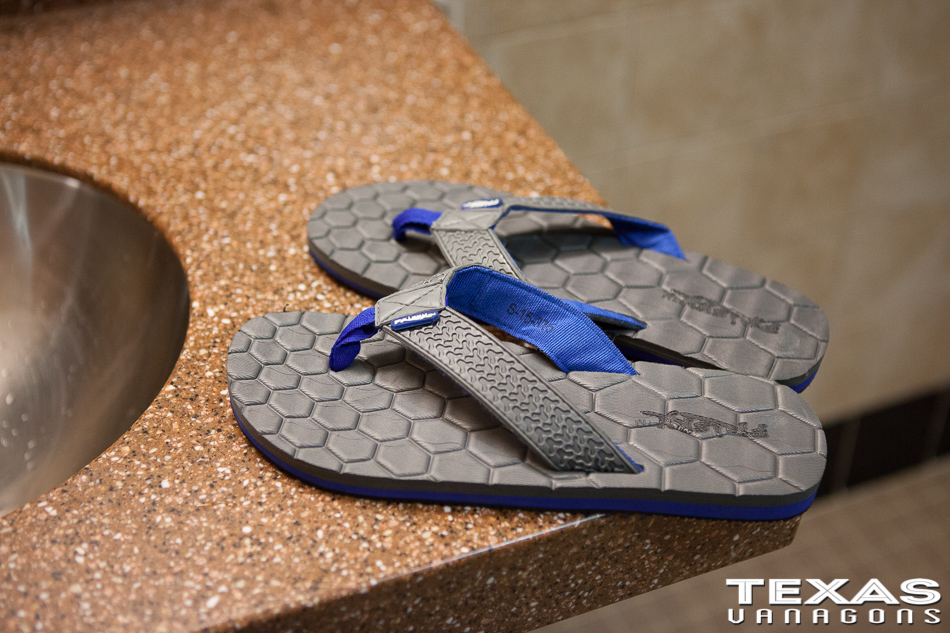 One of the many pluses of showering at a Truck Stop is they provide clean bath towels for you to use. So there’s no need to bring your own and have to worry about drying it while driving. Wash rag, hair towel, two full size towels and a bath floor mat are provided. 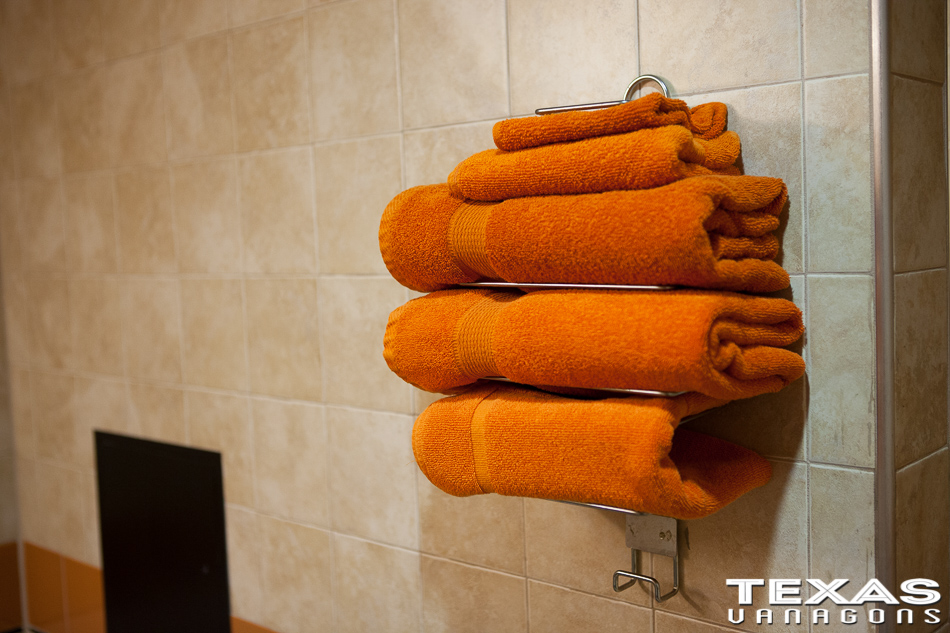 Plenty of hooks to hang your clothes and shower bags from. 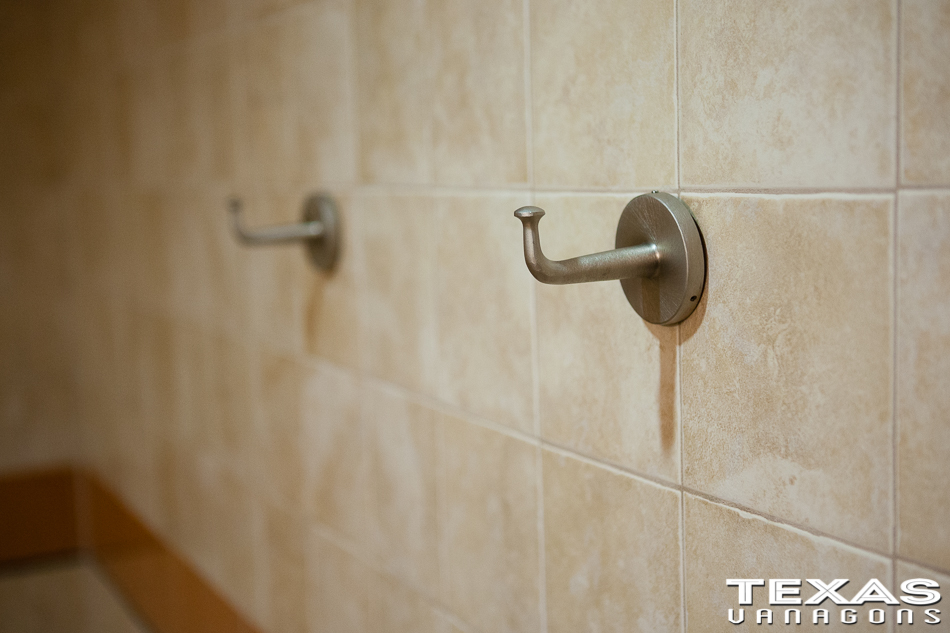 They provide a bar of hand soap at the vanity and a liquid body wash dispenser in the shower. You provide your own shampoo and conditioner. 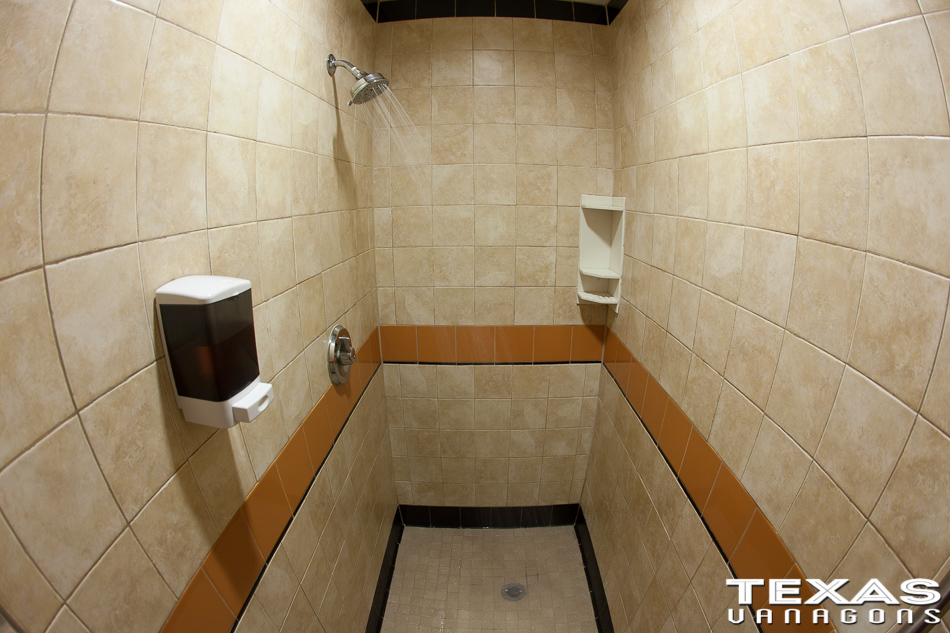 There are many options when it comes to being able to take a shower while on the road but many van dwellers for some reason don’t consider Truck Stops. Hopefully this will help them see what a Truck Stop shower looks like and realize its not such a bad thing after all. I agree the price is a bit high when compared to a night’s stay at a campground but when you need a good, never ending hot shower after a few days of roughing it out in the cold desert then $13 seems like a great bargain!