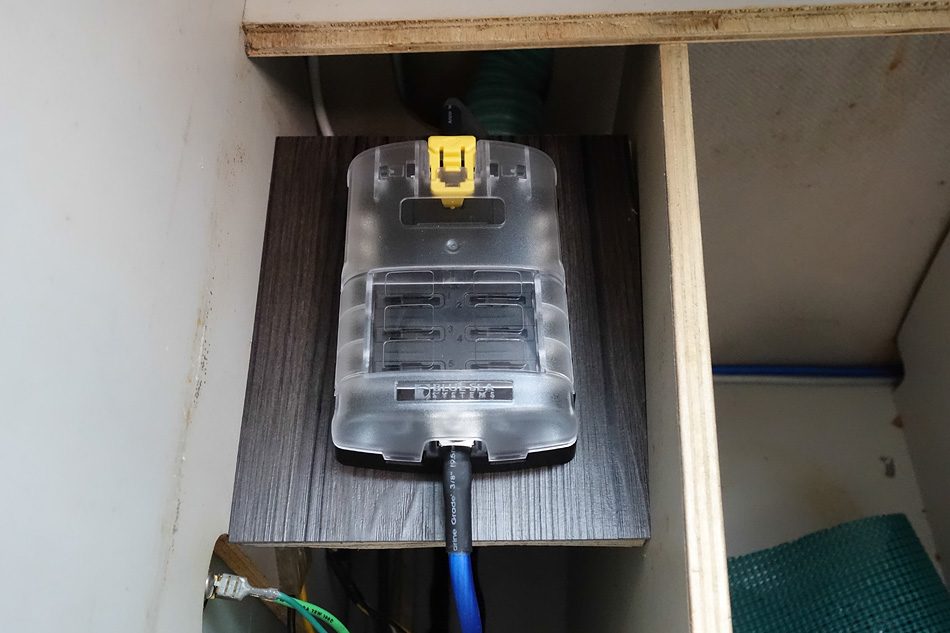 I’ve been wanting to make a post on my auxiliary battery system for awhile now but it keeps evolving errr GROWING! lol. I decided to share a bit of my system piece by piece instead of trying to cover everything at once. This will be WAY easier. I hope. Ha.

First project up to walk you through is my Rear Power Distribution Block. I already had a larger Blue Sea Systems 16254 Fuse Block at the front of the van under my driver’s seat but I wanted something near the rear of the van as well. This way all of my electronics and accessories (ie. LP/CO Detector, LED lighting, 12v Sockets, USB Chargers & Flashlight Charger) in the rear of the van didn’t have to run all the way up to my driver’s seat for power. That’s where the smaller Blue Sea Systems 5025 Fuse Block comes into the picture.

Not all of the items listed below are required for the rear fuse block install but I’m posting links to the items featured in the photo in case you’re curious about them as well.

This is my main power center under my driver’s seat. What I decided to do was add a 4AWG to 8AWG Stinger SHD821 Fuse Block so that I could take the main 4AWG lead from the battery and split it up to four 8AWG fused feeds. The RED ARROWS show the Blue 8AWG (Positive) lead and the Grey 8AWG (Negative) lead that are fed to the rear of the van. I chose to run a dedicated ground wire to the rear block since I’ve had issues in the past with grounds corroding or coming loose so having a dedicated ground wire helps in tracking down ground connectivity issues. 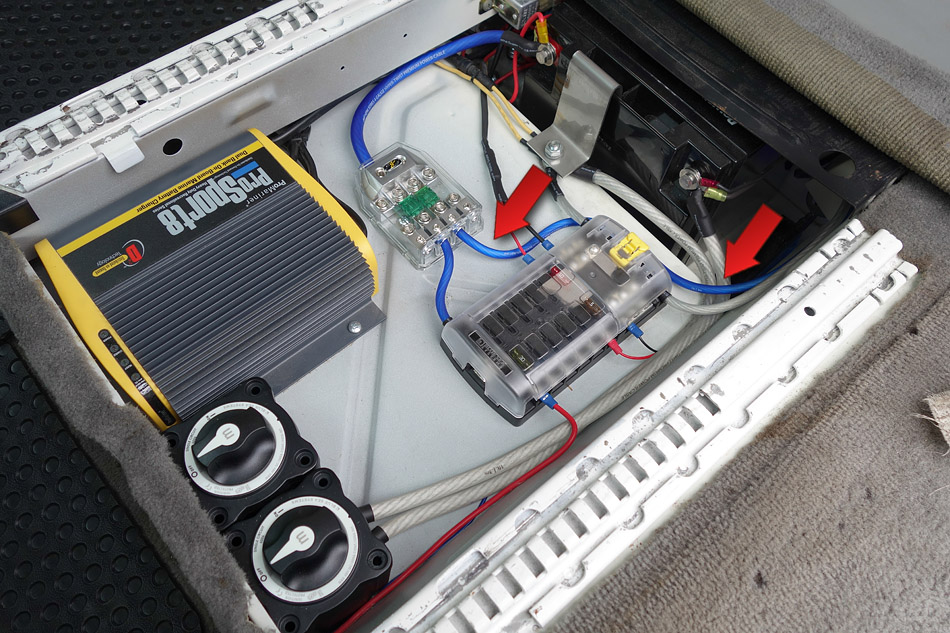 Adding a secondary Blue Sea Fuse Block at the rear of the van has been done before but what I didn’t like was that most of the installs left the fuse block exposed out in the open or in the open mounted on one of the cabinet interior walls. I wanted my block to be secure and safe from items bouncing and/or sliding around. I chose to place mine under the removable bottom in the flat cabinet next to the Westfalia galley. Once this false bottom is removed it exposes the voided area right next to the water holding tank. This area is protected by walls on all sides and made the perfect candidate for housing the fuse block.

I took two small strips of plywood and attached them to the side walls of this voided area to act as supports for my new fuse block mounting plate. Be careful not to use screws that are too long or else you could puncture the side of your water holding tank. Not good. Also check the vertical position of these support strips in order to make sure you can set the false bottom back in place without hitting the top of the fuse block.

After a few measurements I cut another piece of thin plywood and made the fuse block mounting plate. I covered mine with a scrap piece of vinyl flooring I had left over from my floor install (write up HERE). Mounted the Blue Sea Fuse Block to the mounting plate and we’re one step closer to being done. 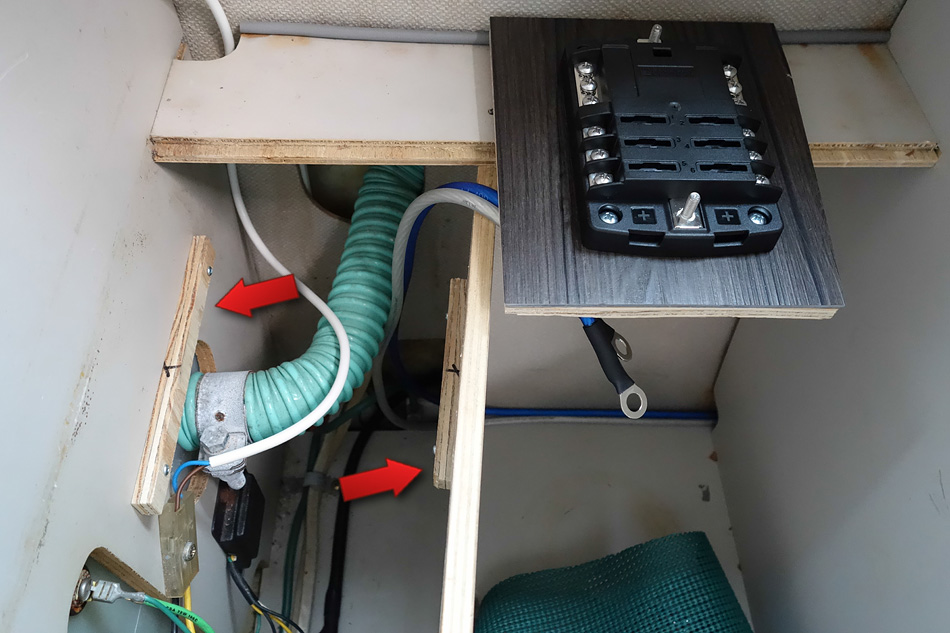 You want the mounting plate to fit nice and snug in the area and with the middle wall/divider being at a slight angle its easy to kinda wedge the fuse block mounting plate into place so it won’t slide around or fall. No need to glue it or mount it in place since you’ll want to be able to remove it if you ever need to service the wiring or hoses for the holding tank below. 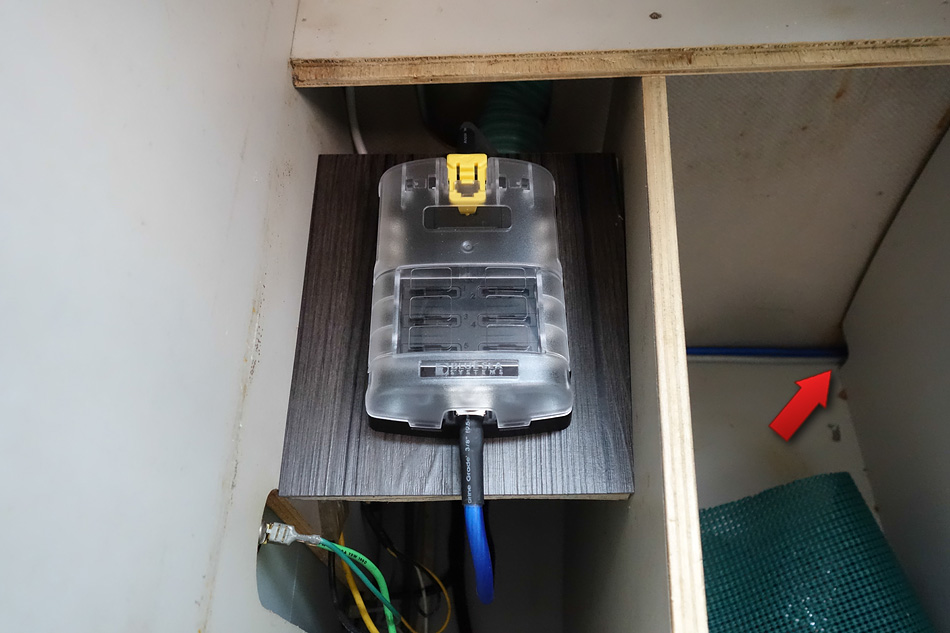 One thing I did that made getting wiring from my accessories that are mounted into my bench seat kick plate (Write up HERE) over to this fuse block was to drill a hole through the side of the bench seat wall and the middle cabinet wall. I used a long enough bit to go through both vertical walls, now I can feed my accessory wiring through these holes and into the voided area that houses my newly placed Blue Sea Fuse Block. Nice and clean. 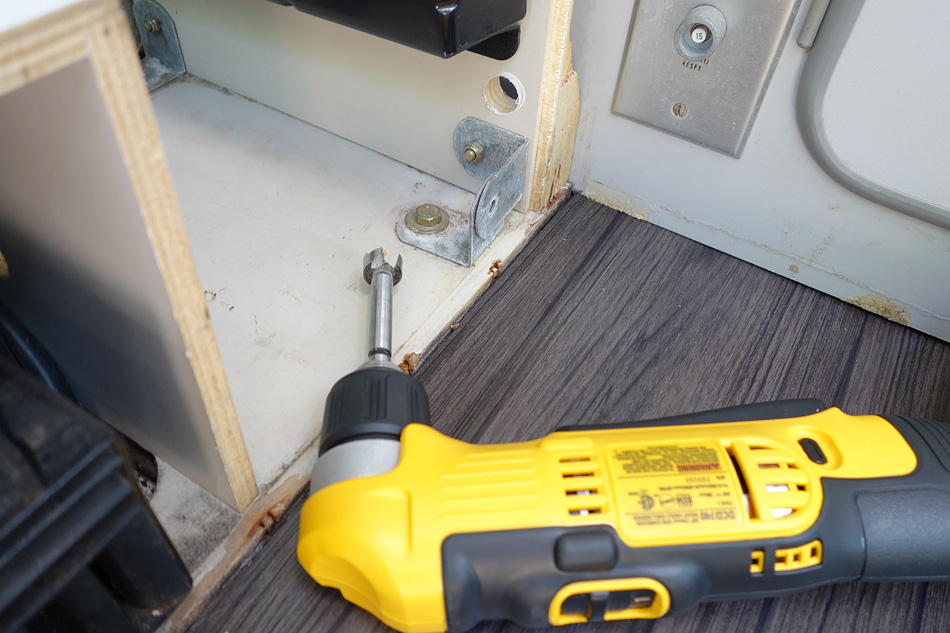 Now all of my accessories in the rear of the van have a short run to get power and ground instead of having to run all the way up front. This install helps keep accessory wiring at a minimum and makes things very manageable.

If you have any questions feel free to post them in the comments section below and I’ll answer them as quickly as possible.